Let me tell you about that time I said YES! to hosting a Gr8fool Freedom Coaching stand at the Italian AMA Music Festival. 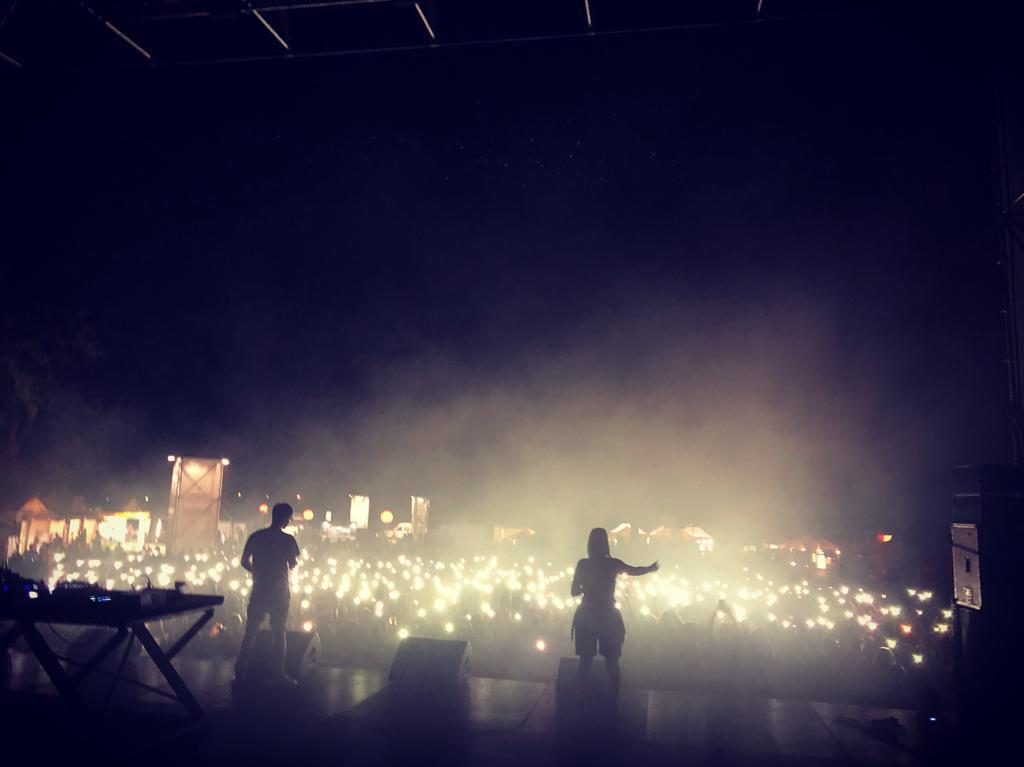 Back in 2005, my dear friend Andrea Dal Mina had the brilliant idea and determination of organising a local music festival in the old town centre of Asolo. My Birthtown in Italy!

I’ve known Andrea since we were teenagers. He had long hair, played drums in a cool band and I had a big crush on him. The crush was mutual and we were together till I moved to London at 17.  Our special friendship spans over a quarter of a century!

Asolo is a charming historical town (borgo) in the province of Treviso, North of Venice.  Here’s a flavour of the love it attracts globally… with some gossip news:

Oh, and incidentally Andrea features in this movie as an extra. How funny!
Here’s a link to the clip: youtube.com/watch/ripleys game (in Italian) 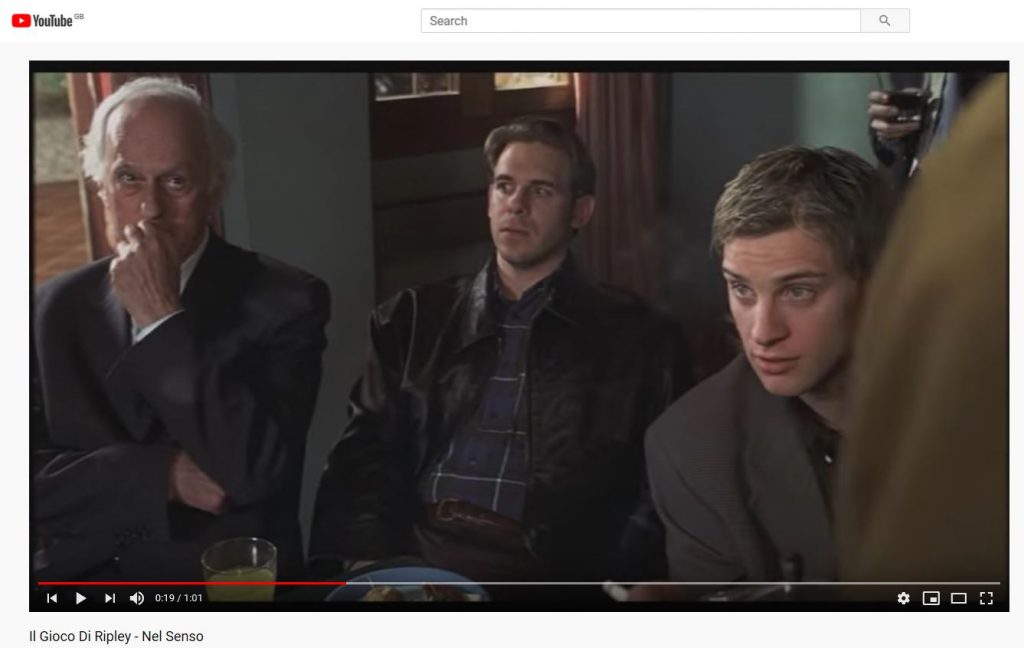 Over time, the festival grew both in popularity and size. It eventually needed to relocate to a larger space on the outskirts of Asolo and more recently to a new area near beautiful Bassano del Grappa (Vicenza).

I am super proud of Andrea, Founder and Art Director of what in 2015 became officially known as the AMA Music Festival. It now attracts c.20,000 festival goers each year, who enjoy a 4-day programme of music and events. 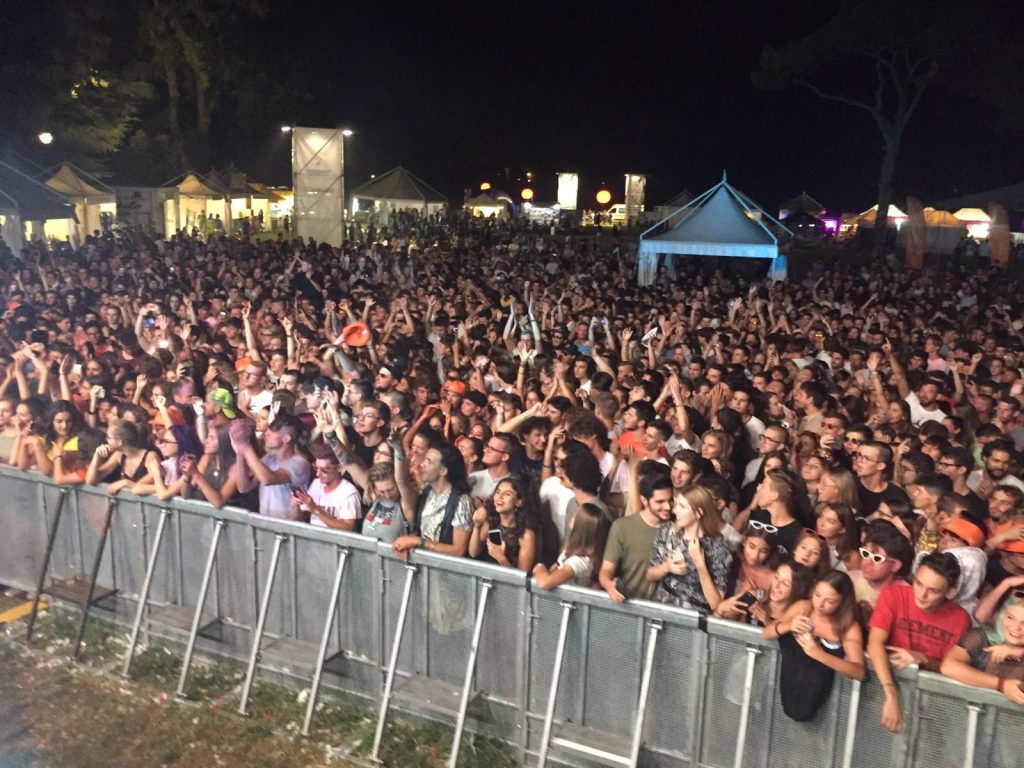 When Andrea asked if I was going to show up at AMA this year, I was still touring Europe in my campervan. The festival dates didn’t work for me because I was planning to return to the UK around that time.

Then he tells me Mahmood (an Italian singer I like) was headlining on the Saturday night and suggests I could have a stand for Gr8fool. Both fun reasons to spark a Yes! in me.  I had no idea what I was getting myself into but I liked the opportunity of creating a space to promote the Gr8fool vibes of Freedom, Adventure and Gratitude. The challenge was on.

“Book me a little corner for Gr8fool and put me on stage for 15mins, and I’m there!”

ACKNOWLEDGE FEARS AND GO FOR IT..

How am I going to show up with a stand on Freedom Coaching in an area where life coaching is still vastly unheard of and at a festival where all other stands will be selling either food and drinks or clothes and accessories? With the exception of promoted no-profit organisations, including the amazing SeaSheperd Italia.

I never hosted a corporate stand before and I was going to be travelling, vanlife-ing on the road right up until my return to London to catch a flight to Venice just 2 days before the event.

As an optimistic, I knew somehow things would work out wonderfully, and they did.  But it couldn’t have happened without the precious support from amazing people at home, especially my family. 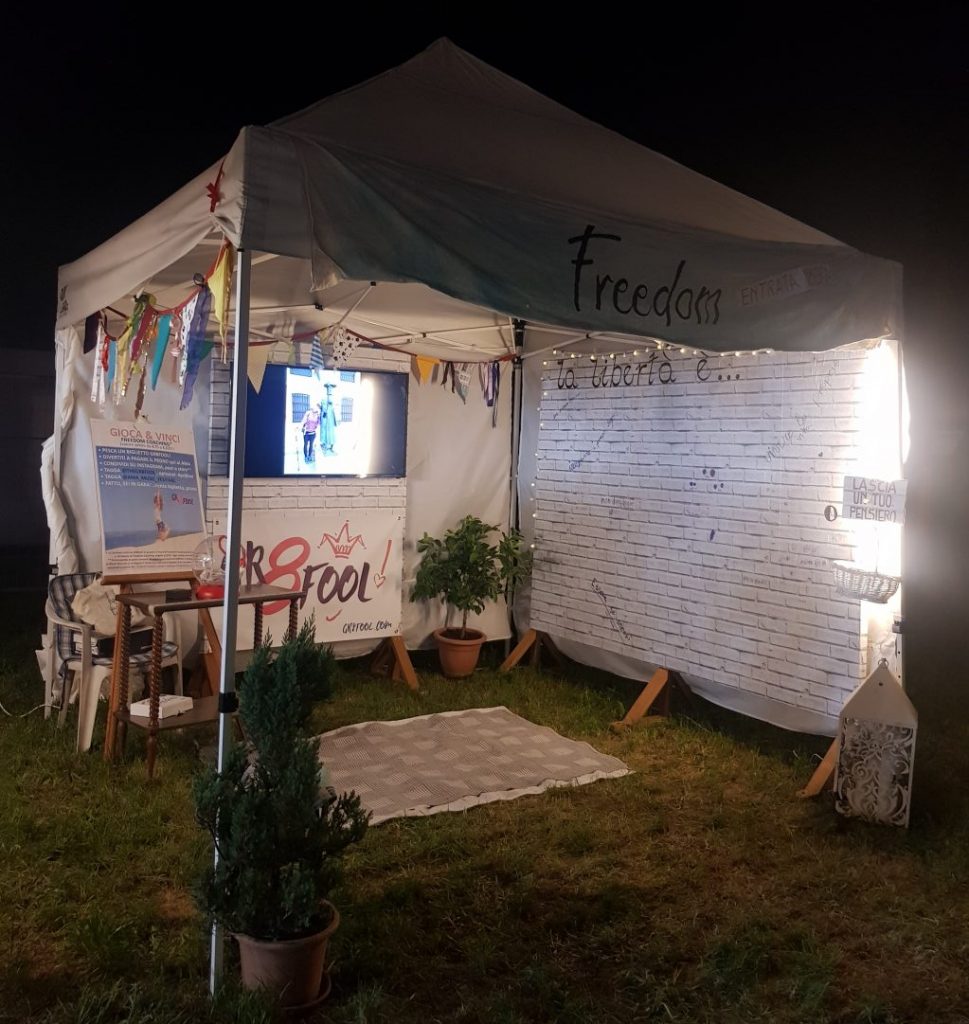 WRITINGS ON THE WALL!

The Gr8fool Freedom Coaching stand was a great opportunity to promote the brand, inspire freedom and adventure, and create a space to spark curiosity, where festival goers would want to hang out.

While thinking of how to use my 3m x 3m space, I remembered Italians love writing on walls… and on anything really. I decided the main feature would be a wall made of wooden structure covered with white brick wallpaper, inviting people to write and share their meaning of Freedom: “La Liberta’ e’…”

In the meantime, photos of my travels, vanlife and adventures would roll on a big screen and I designed little cards that people could pick out of a bowl. On each card they’d find an act of kindness, gratitude or foolishness that they could play out at the festival.

By day 3 I had to add new layers of wallpaper, the wall had been so popular. 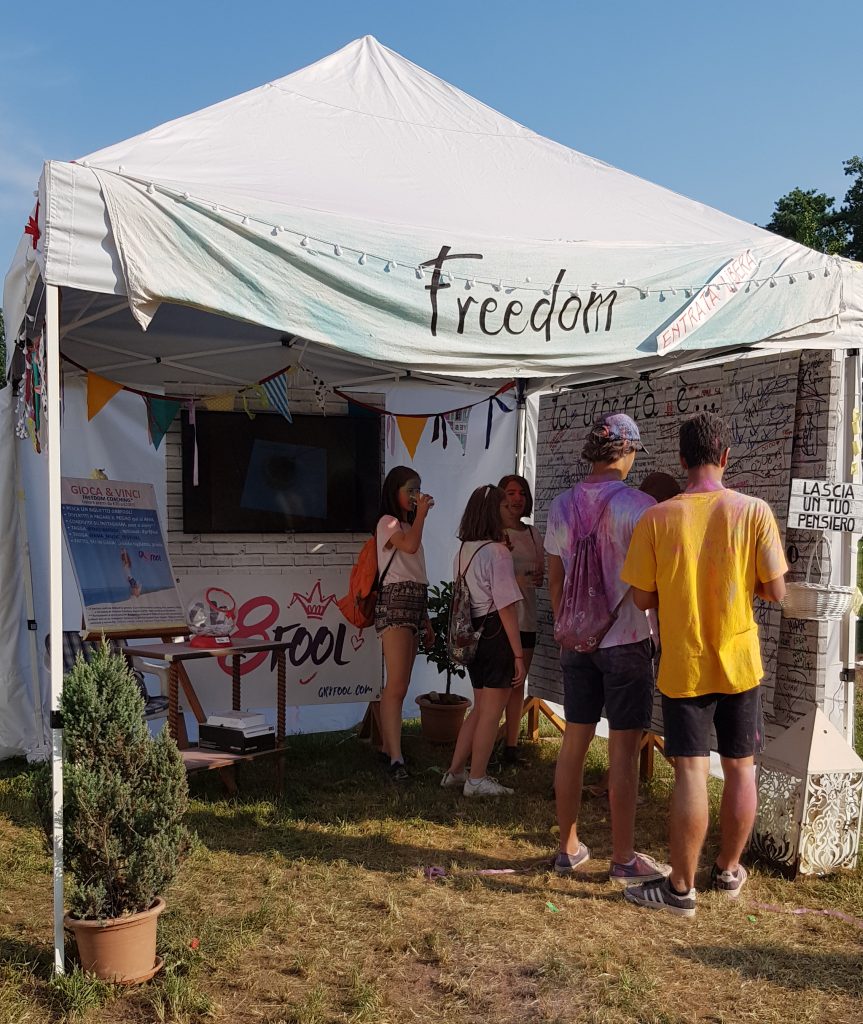 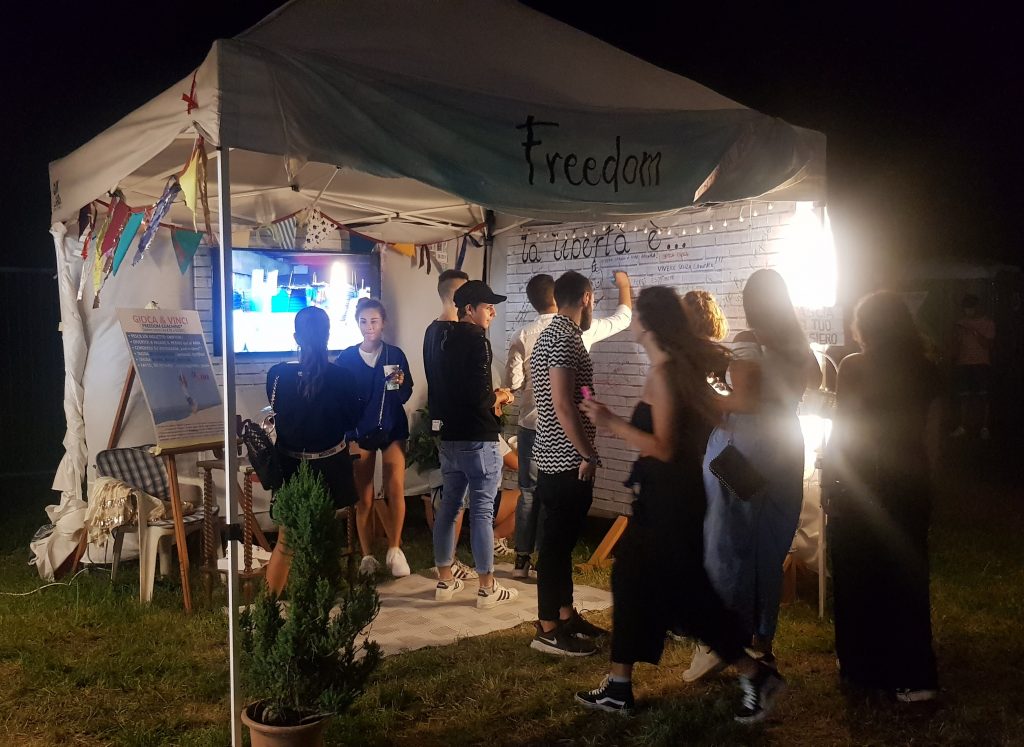 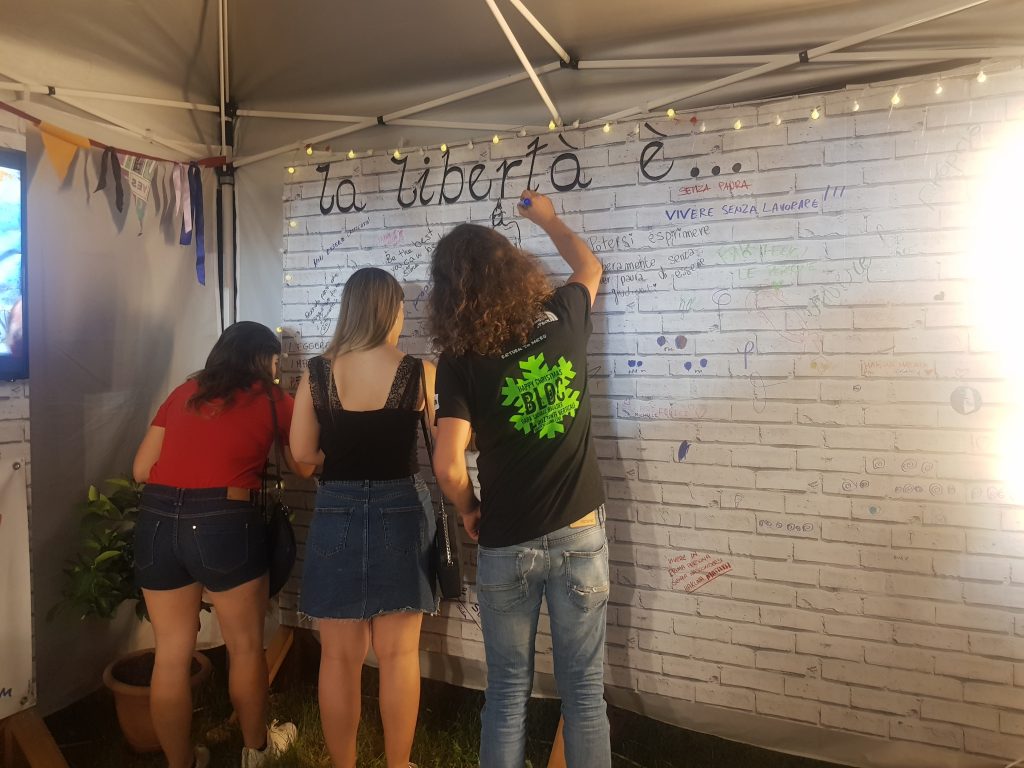 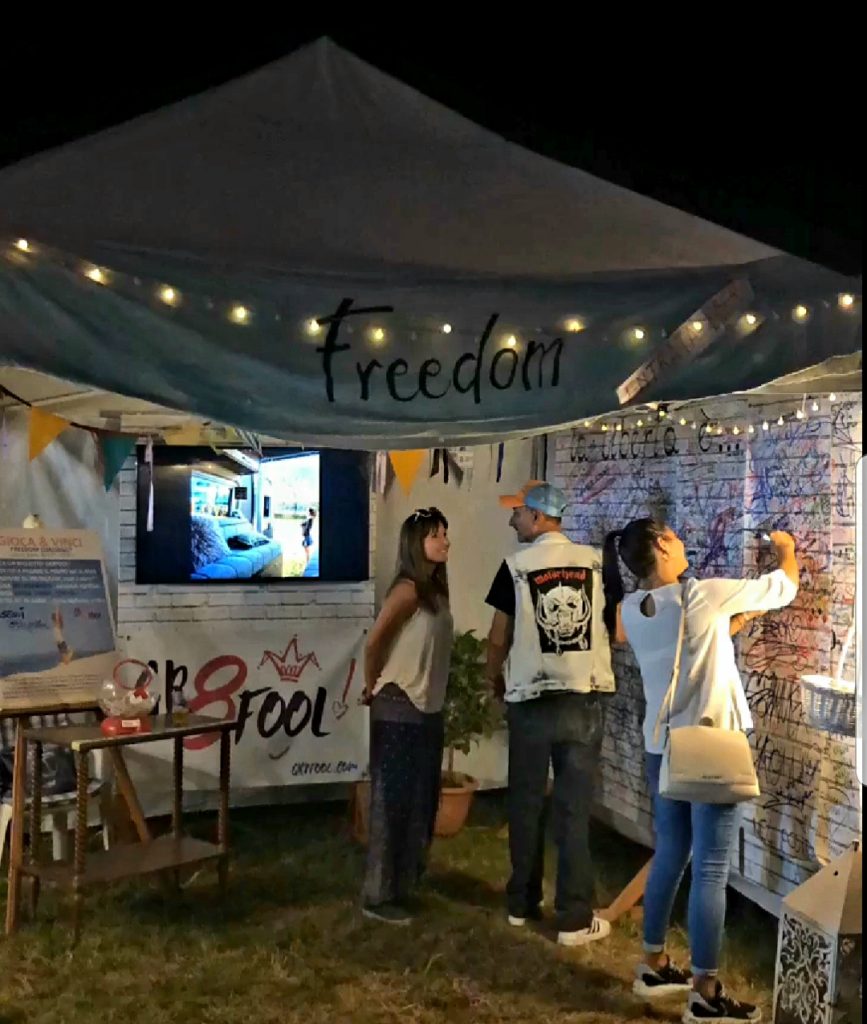 I ordered most of the marketing material online for delivery in London and at my parents’ in Italy. Dear friends lent me a large TV screen and a tripod. My creative nieces Giulia and Ilaria helped me with fun ideas and banners. My awesome dad got his lifetime carpenter friend to cut pieces for the wall.  I borrowed plants and furniture from my amazing mum who also hand-crafted strings of flags reusing old fabrics. And last but certainly not least, my ingenious twin brother Filippo helped me put it all together and dismantling everything at the end. A Rock Star!

The best team work and support ever. THANK YOU! I am so Gr8fool for the people in my life. 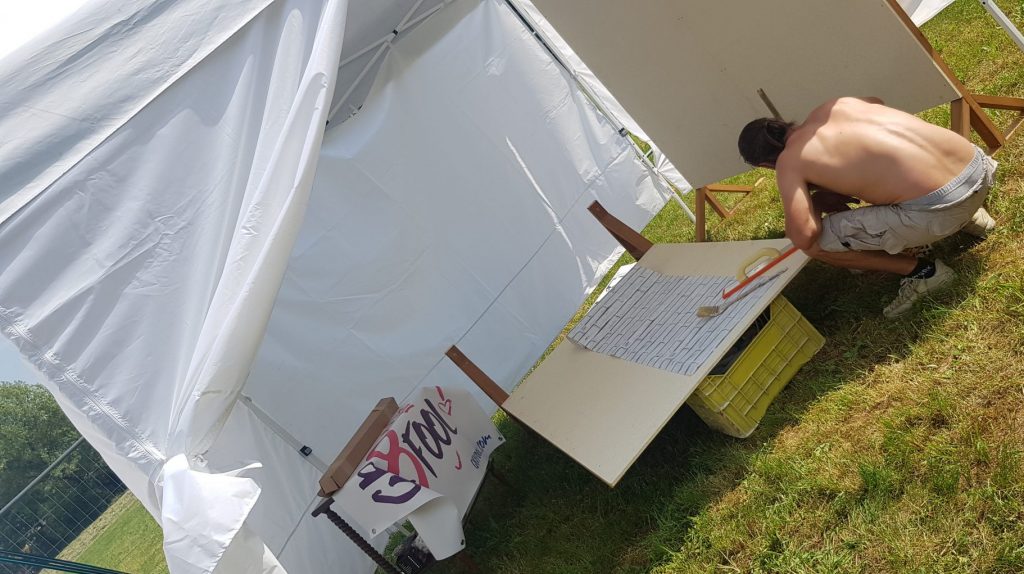 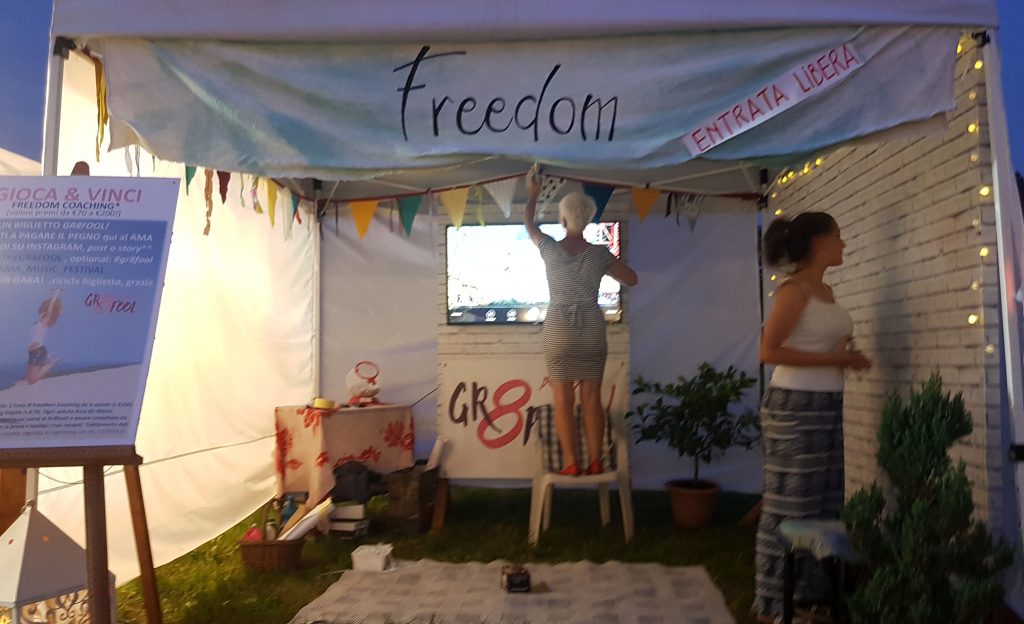 It was a free wall, hence no rules applied. 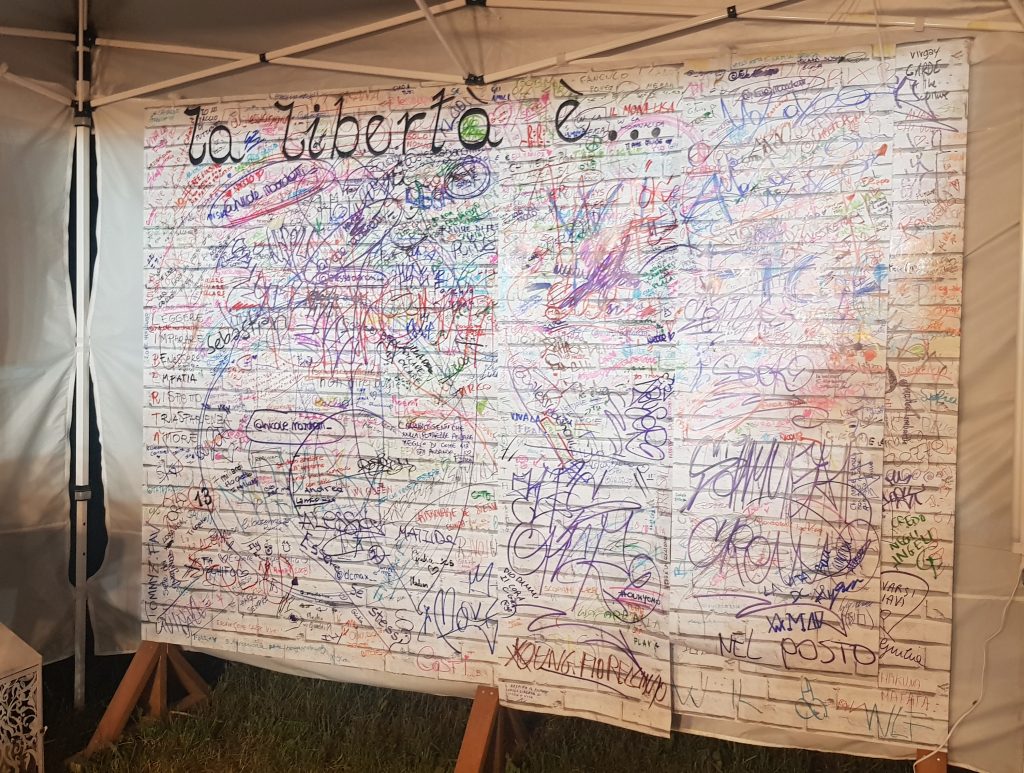 Some language was quite strong, others scribbled their artsy signatures or quotes… but most of the wall was filled with lovely definitions of Freedom / Liberta’.  Here is an extract from the list I transcribed from it (translated into English where needed):

1. Live it. Love it. Colour it until you lose control of it.
2. GOD
3. Not being Criticised
4. [Using each letters of LIBERTA]: Read. Learn. Wellbeing. Empathy. Respect. Transparency. Love
5. Think Freely
6. Be Who the F**k You Want
7. When you are yourself, no judgement weighs you down because it’s just envy for your freedom of being.
8. Not telling lies
9. Freedom is a running horse
10. Drawing of a Unicorn
11. Feeling grateful always
12. Loving who you want when you want
13. When you feel nothing could be better than it already is
14. Finding yourself
15. Be who you want to be
16. I love my mum and dad
17. Being happy always
18. Free hugs…I’m a cactus [drawing of cactus}
19. Hakuna Matata
20. Live day by day
21. Travelling
22. Born this way be free
23. Being able to express yourself freely, with no fear of judgement
24. Travelling and discovering new places
25. Honesty
26. Being Single
27. Having limits
28. Making other people happy
29. Wellbing (in all areas)
30. Living at 100km/h

The stand and wall were enjoyed by friends and people of all ages. It felt very special. 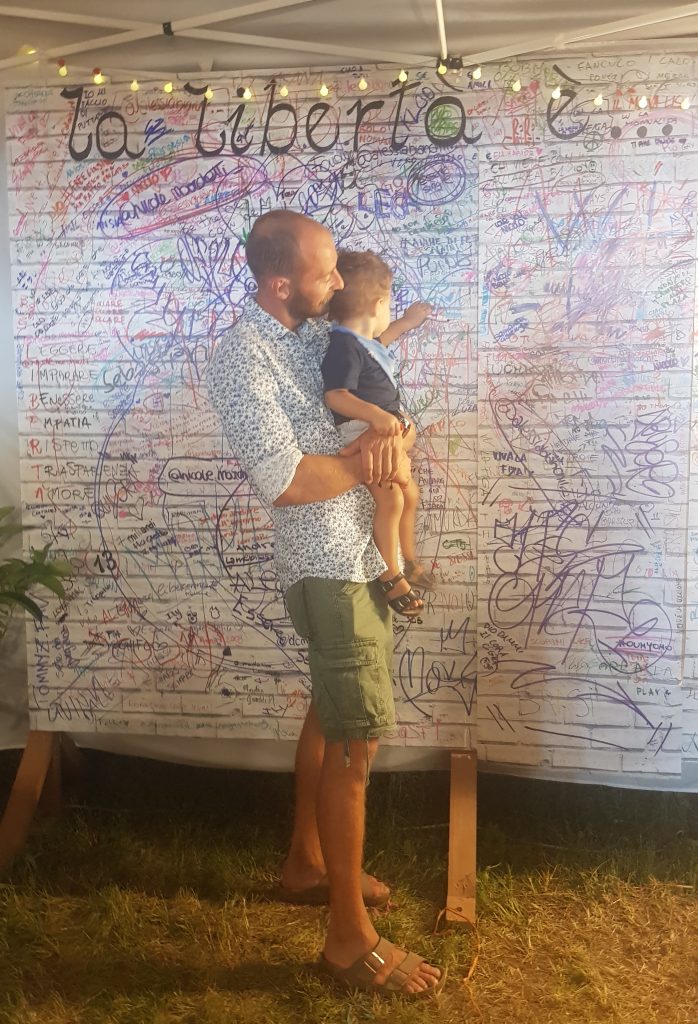 Stepping away from the Gr8fool freedom stand every now and then allowed people to feel comfortable about spending time in it, interacting freely and being creative.  One evening, a lively guy I met at the stand loved the idea of the “acts cards” and suggested we walked around the festival to get more people to pick and play. It was so much fun. 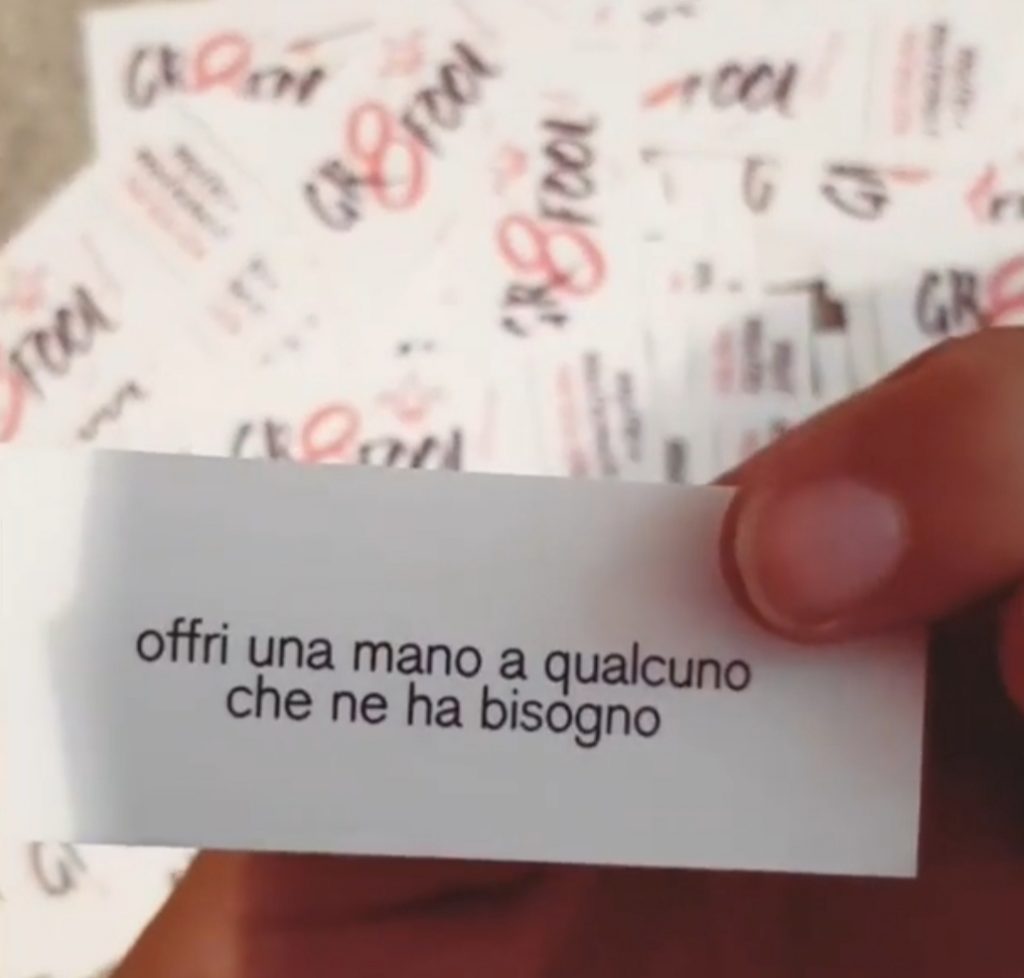 Loads of people participated, despite many showing initial reluctance, wondering what catch would hide behind it. There was no catch of course, the idea was to trigger little challenges and new thoughts.

The stand was a real success in terms of the level of fun and engagement I wanted to achieve.  I was looking to create a meeting point where people could get curious, inspired and ask questions.  In terms of promoting the business brand, I did expect to gain more followers however I’ve learnt that the easiest way to reach this goal next time would be to simply ASK.

I forgot I previously jokingly asked Andrea to give me a slot on stage… it was not that kind of event but the joke manifested it regardless…! 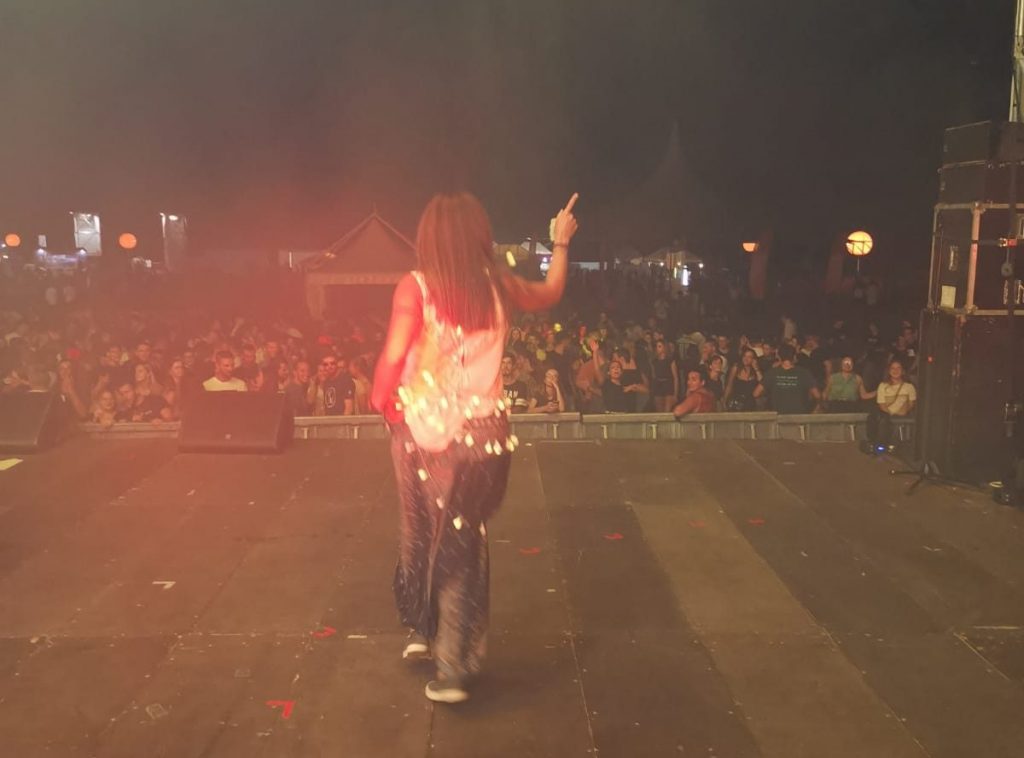 On the last night, I started packing up my stand around 1am while the closing act was still playing.  I had a 10 metre battery-powered string of lights hanging around the perimeter of my gazebo and instead of rolling it up as normal I started spinning on the spot, making the string wrap around my body.

Result? I looked like a human Xmas tree!  So I decided to take a walk with the lights flickering around my silhouette, and it sure did attract attention, and most importantly smiles.

On my tour I bumped into friends, including the President of Sea Shepherd Italia who loved the energy from the walking light show. He suggested I share it on stage and dance by the DJ. You What?

After all, one of my Gr8fool cards did say “Dance like there is no tomorrow!” Why not! …acknowledge the fears and go for it anyway, right? and say Yes! more….I was handed a VIP pass and led backstage. 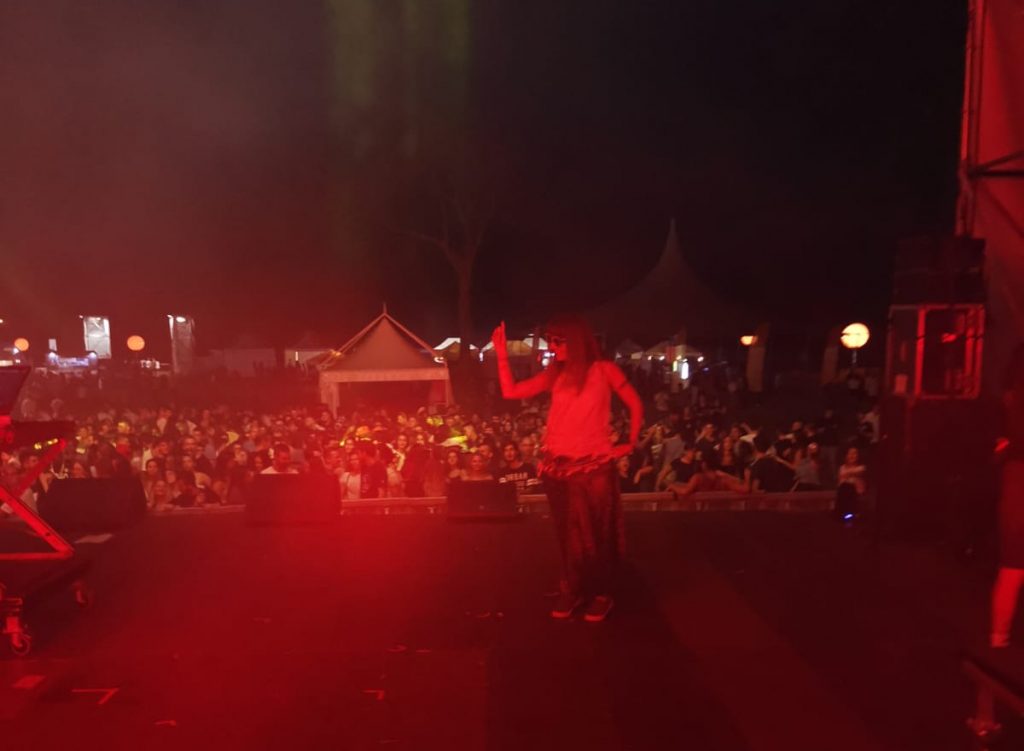 Bring on the next AMA Music Festival! And to find out more about Gr8fool and my Freedom Coaching programmes, visit: gr8fool.com/freedom-coaching-programmes/